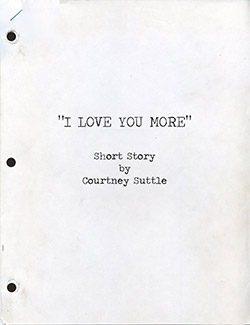 An eerie howl floated on the wind. My sister shivered next to me. I ducked down behind the shattered dresser and knelt beside her. Putting my arm around her I pulled her close.

“I love you more,” she said. She’d been saying that since we were kids, since she was old enough to talk.

The howling sounded again, closer this time. MJ’s teeth chattered together. But it wasn’t from the cold air. The Pack’s blood was up.

“No! They’re hunting but they don’t have a scent yet.”

“Soon, kid. Gotta get that food we saw yesterday and I can’t do it alone.”

“But don’t we have enough food already?”

“No.” And that was the truth. We needed enough for 8 months now that the winters were so damn long. We had maybe enough for 4 months between us but she didn’t know that. I would figure out something. Always did.

“But we’re close, sis. Real close. And you can help get us there.”

She sagged momentarily then straightened her shoulders and sucked in a long breath.

I examined the debris strewn interior of the furniture store. Several rotting bodies, more skeletons than corpses, lay where they’d fallen. I remembered a time when the sight of dead bodies freaked me out. That had been well over a year ago when there remained a semblance of organized society. Back when the retrieving and disposing of dead bodies was a priority of the still functioning city government. Back when radiation sickness and collapsing buildings were the biggest concerns for the survivors of the nuclear strike.

Then the H4N2 virus hit Denver like a sledgehammer and it all came apart.

I carefully stood and peered out from behind the dresser at the street. Glass crunched under my feet. Dust and smoke blew down the boulevard. Big fire down at the tire plant. Been burning for days.

Satisfied for the moment I crouched back down next to MJ.
“Few more minutes.”

She nodded her head.

I glanced at the corpses again. Stupid people. A furniture store for Christ’s sake. Storefront of floor to ceiling plate glass windows. Why had they decided to weather the riots here? The place was completely indefensible. Stupid.

“We have enough daylight?”

“What’s left will have to do.”

I put my arm around MJ’s waist and lifted her to her feet. I could feel her ribs and not much else. We had to get the food. She was wasting away.

We moved to the back of the store, went through an opening blown in the back wall and stepped into the alley. More bodies, an overturned dumpster and piles of trash and debris surrounded us. I grabbed her hand and led her as we picked our way down the alley to 4th Street. I pressed her against the wall and inched forward to observe the street in both directions.

This was Cowboy Killer territory. The gang controlled most of the south side of downtown Denver. But even they weren’t dumb enough to come out when the Pack hunted.

The street was clear. I motioned MJ toward me. She sidled up next to me.

“Okay. See that convenience store across the street?” I asked her.

“The one that’s all caved in?”

“Yep. There’s a case of cat food, maybe more, at the back. But it’s under a beam that caved in and I’m too big to crawl under it.”

The howling froze us both in place. The Pack was closer.

She gulped and nodded her head too frightened to speak. I grabbed her hand and pulled her out into the street before she had too much time to think about it. We dashed across 4th and tumbled into the opening of Bob’s Ready Market. I pressed her to the ground underneath me and listened carefully before lifting my head. I stared through an empty display case at the street. Nothing.

We scrabbled on hands and knees toward the back of the store. The beam had come down at an angle crushing shelves and refrigerated drink cases before coming to rest on the floor. It had torn open the back wall revealing the storage room. As with any food repository it had been picked clean but I’d learned to always look, never take anything for granted, which is how I’d discovered the case of cat food the day before.

I turned to her to point out where I wanted her to go and saw her staring frozen into space. My skin chilled and I slowly followed her gaze up to the ceiling. It peered into the gloom through the gaping hole in the roof left by the collapsing beam.

MJ breathed quickly on the far side of panic. I had a few seconds before she came unglued. It sniffed the air trying to pick up our scent.

I slowly edged my right hand to the back of my belt and grasped the handle of my combat knife. I eased the leather strap over the blade guard and slipped the knife from its scabbard. I kept the knife under my leg to keep light from reflecting off the blade.

Get the fuck out of here. Nothing for you here. Just move on.

No luck. It began to slither down the beam. Even in the dim daylight of nuclear winter I could see the yellow skin and the tumors growing from its almost hairless scalp. Human no more the feral creature had joined The Pack and now hunted humans for the yield of their flesh. And where there was one, dozens of others hunted close by.

When it got halfway down the beam it paused and looked straight at MJ. She whimpered and that was enough. It snarled and leaped at her. I came out of the shadows and caught it with the knife under its rib cage ripping upward. It opened its mouth to howl and as we crashed to the ground I pounded my left fist into its throat. The howl came out as a gurgle of blood and dying breath. Just to make sure I pulled the knife out and slit its throat just below the jaw line.

I crab crawled backwards and caught my breath too exhausted to think.

“Then we have to hurry.”

“We have to have this food or we won’t make it through the winter.”

“We can come back when-”

“The Pack will mark this place and we’ll never get another chance.”

I grabbed her arm and dragged her to the small space under the beam.

I pushed her forward and hissed, “Now go!”

She slid under the beam into the storage room.

A howl erupted from just down the street.

I flashed my penlight into the dark recess.

“See the cans? Right there!”

She scrabbled cans into her back pack. When it was full she slid it out and I handed her my backpack. She filled it quickly and shoved it toward me. I pulled it and it stuck.

I could hear them now coming down the street. I yanked again and nothing happened.

“Is it caught on something?” I shined the light on the pack.

I let go of the pack and she pulled it towards her and then shoved it back toward me. When I dragged it toward me this time it came freely. MJ scrambled out behind it and I dragged her to the side of the store, shoving her backpack into her hands. She slung it over her shoulders as we ran out onto Hallmark Ave.

In earlier days I would have carried both packs but I was too weak to do that now. MJ would have to hold up her end if we were going to get the food back to the shelter.

We snaked through burned out cars and piles of rubble. Two blocks later we heard the pitch of the howling change.

“And now they’ve got our scent.”

It was a race.

I glanced to my right and saw a shadow in a doorway. Cowboy Killer.

“They gonna eat you alive, boy! Serve you right going through CK territory,” he shouted. The door slammed and we continued running for our lives.

MJ stumbled and fell. I ran back and hauled her to her feet. She was too out of breath to cry.

I dragged her down the street.

Warehouse district. The old ice plant. It had a cellar up front just on the other side of the loading dock where they stored the ice. It had a double iron door that could be bolted from the inside. Impregnable. We had fixed it up with cots, blankets, candles, books, all the comforts of home. The snow melt from the roof would give us plenty of water. The insulation that served to keep the ice from melting would serve to keep us from freezing to death during the long winter ahead.

She gathered herself for the final dash.

We vaulted over the retaining wall and ran to the dock. I leaped up on the platform and reached down.

She was so weak she could barely raise it after the long run but finally she got it high enough to where I could grab it. I hefted it onto the dock.

She raised her hand so I could lift her up.

I looked into her eyes. “I know you do.”

She saw it then, knew me too well.

I stood up. Tears started to spill from her eyes. I put two fingers in my mouth and blew. My piercing whistle was answered by an urgent howl and then two of them jumped up on a burned out car down the street and looked straight at me. More heads popped up from the blast damaged buildings. All at once The Pack lunged forward racing toward us.

I stepped back into the entrance of our home and opened the door. I turned towards her. I could see her little hands as they grasped the top of the dock. The knuckles showed white in the dim light of dusk as she desperately tried to lift herself up.

I stepped into the bunker and slammed the door shut ramming home the steel bolts.

I’d figured it out.

I clapped my hands over my ears to muffle her screams as The Pack took her down.