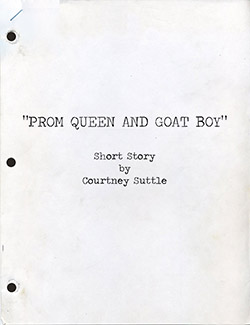 There you are. Right on time.

Jack lowered his binoculars carefully and glanced at the sky checking the angle of the sun. His survival could hinge on something as simple as foolishly allowing sunlight to glint off of the glass lenses of his high powered Zeiss Conquests. But Jack survived exactly because of his extreme, careful attention to detail.

Jack raised the binoculars again and looked down the mountain at the small party gathered at the bend in highway 180. An elegant woman in her mid fifties stood in the middle of a group of armed men dressed in a motley collection of hunting clothes and military issue camouflage gear. The men deferred to her and waited patiently as she gazed up the mountain.

Where’s the old man? Get sick and die did he?

Her husband, the mayor, hadn’t made the journey in almost three weeks. He’d been coughing and stooped the last few times Jack had observed the small procession. A couple of the men in this group coughed as well. All of them looked pale and gaunt.

H4N2 erupted on a population weakened by the effects of nuclear fallout, malnutrition and exhaustion. After all the scares, bird flu, swine flu, SARS, etc., mother nature had finally gotten it right. The kill rate was just above 50%.

With the utter breakdown in health services since the first nuclear exchange not only was there no vaccine available there was never going to be any vaccine. If an individual contracted the virus there was nothing to be done.

Flip a coin. Live or die.

The only thing that had initially spared the small town of Lovelette, Colorado was its relative isolation. The town had prohibited entry to anyone once the plague manifested and enforced the quarantine with lethal force. But they couldn’t stop love.

John Bolt hailed from a town 20 miles to the north already infested with the plague. Lovesick for his girlfriend, Emily Prater, he found a way through the cordon and spent a night literally rolling around in the hay with her. In the morning he gave her a promise ring along with a virulent case of the H. Emily returned home and hugged and kissed her father who then left for work. As he was the town’s doctor he treated 28 patients that day and gave them the gift of John Bolt. Within 48 hours the whole town was overrun with H. Jack had watched the funeral pyres from the safety of his mountain hide out.

Jack came from a long line of God fearing mountain men. His grandfather had preached Armageddon and prepared diligently for the coming of God’s wrath. It was he who had excavated an underground complex in the side of their mountain. His father had expanded on the work and Jack had inherited the complex on his father’s passing.

Jack had never believed in the fire and brimstone rantings of his elders but he did believe in Karma. And after he’d experienced in school the inherent cruelty in human nature Jack realized that someday the Karmic ball would come rolling around on good old humanity. That is why he’d continued the preparations of his forefathers.

”Goat Boy’s still here if you want to try him again,” Jack muttered as he shifted his position and swept his left flank with the binoculars. After a careful observation of the terrain on his left he switched positions and performed the same sweep on his right flank. Even though he had trip flares cleverly concealed throughout the forest he never left anything to chance.

A few days after Betsy had left the dubious safety of the town to be with him the townsfolk had attempted to infiltrate his position from the flanks. They’d stumbled into a nest of claymore mines, booby traps and Punji pits lined with stakes soaked in urine and animal dung. Thirteen dead and twice that many wounded. Instead of killing the wounded, which would have been easy to do, Jack had let them crawl back down the mountain to serve as a reminder of what would happen to anyone who dared to come into his domain. It was not lost on him that the wounded men would add an incredible burden to the overtaxed resources of Lovelette.

Jack had learned that lesson in the Army. The wounded took many times the resources and manpower to care for than their society expended on a dead combatant. So many lessons learned. Those four years were the only time he’d left the safety of the mountain. And it was worth every day he’d spent away from his sanctuary.

Jack checked his watch. Betsy would have supper on in another hour. But it looked like he’d be eating a cold plate again. He wouldn’t leave until the group had returned to town. Her safety was paramount. She understood. She always seemed to understand. Too bad no one else did.

Goat Boy.  Survivalist Freak.  Hillbilly.  From his first day in school the kids had teased and bullied him mercilessly.  He dressed differently, talked differently.  And they took no pains in pointing out every little nuance of his character that amused them. All except Betsy.

She came from the wealthiest family in town. Her ancestors had mined sliver from the surrounding mountains and made a fortune. Lovelette was the town they’d built to house their workers. When the silver ran out they switched to logging. A Lovelette had always been mayor and always would be mayor. They were royalty in these mountains.

So when Jack took to Betsy and her to him he knew there’d be trouble. But they played it well acknowledging their infatuation with stolen glances and subtle hand waves. In order for them to be together they both understood she would sometimes have to make fun of him with the others. No one could suspect. If her parents ever found out then they might send her away to school and that would kill them both. But they stole their moments and bided their time.

At the end of their senior year she was elected prom queen. She asked Cal Stuckey, captain of the football team, to be her escort because her parents would approve. Jack wasn’t jealous. He knew her dalliances with other boys camouflaged their relationship.

Jack didn’t attend the prom. His love was with another and after 12 miserable years in school he had nothing to celebrate. But he did steal his way down the mountain and watch Betsy emerge from her house on the arm of Cal Stuckey. She was beautiful. His prom queen.

Who would have thought it would have been Iran and Pakistan that would kick off the end of the world. China backed Iran. The US backed Pakistan. Russia decided it was a perfect opportunity to take out China and 40 minutes later the world was on fire.

And for all the townsfolk who’d ridiculed him and his family it became their moment of truth. The mayor declared martial law. All provisions were requisitioned, centrally located and rationed. Roadblocks were placed on the highway leading in and out of town. An armed militia was recruited and patrols formed.

Jack knew they were just spitting in the wind.

The only one ready for the end of the world was Goat Boy, the survivalist freak.

Food became scarce and gasoline quickly ran out. The town had to fight off several bands of marauders looking for easy pickings. Dogs and cats disappeared. And winter hadn’t yet arrived.

Then the whispers started.

Goat Boy’s got food up there.

Enough for years I hear.

It’s only right he shares it with the rest of the town.

Finally the mayor organized an armed expedition to take from Goat Boy what they should have had the sense to stockpile themselves. Oh what a day that had been. They had no idea what lay in wait for them.

The army trained him well. Let them enter the kill zone. Set off the mines. Next take out the leaders. Then have your way with what’s left.

They left the mountain to Goat Boy and never came back…until Betsy left them to be with him.

Not today, you arrogant bitch. It must kill her highness to know she picked Goat Boy over you.

Several weeks ago he’d gone down to Lovelette at the beginnings of the H plague. He’d found Betsy and let her know she had a safe place with him if she ever chose to leave the city. He’d explained to her he had medical supplies and all the food she could eat. Jack had told her to come to the bend in the 180 east of town and to wait there. He also told her she was free to leave anytime she wanted.

Three days later she had come. He waited to make sure she hadn’t been followed and then led her to his sanctuary. There they talked for the first time in years.

Betsy told him how bad it was in town. Small children were vanishing. There were rumors of cannibalism. Good families were selling their daughter’s bodies for food. Neighbor turned against neighbor. Maybe if Jack could share some supplies, help alleviate the situation, things could return to normal.

Jack listened patiently. When she was finished he told her how he couldn’t help those that weren’t smart enough to help themselves. He told her about karma and cruelty and God’s divine justice. Then he confessed his undying love for her. The rest was kind of fuzzy. He remembered them falling into each others arms and making love for the first of many times. After that she seemed content to stay with him.

The small procession began the slow walk back to town. Mrs. Lovelette looked back over her shoulder once more then dropped her head and disappeared around a bend in the road.

Jack gathered his rifle and equipment and checked the sky. Blizzard coming.

That should keep the bitch off the road for a few days.

Jack slowly slithered out of his foxhole and began to make his way up the mountainside.

Jack pause at the edge of the clearing hacked out of the forest in front of his hideout. It was nothing more than a killing field should anyone make it this far. He carefully observed his surroundings for an hour before making his way to the door recessed into the side of the mountain.

Jack swept the clearing and the forest beyond one more time as he scratched his scalp. A thick clump of bloody hair stuck in his finger nails. He flicked it to the ground without taking notice.

Pulling the thick metal key from around his neck he took one last look over his shoulder before slamming the key home and turning it until the bolt disengaged. He leaned into the heavy door with his shoulder and pushed it open.

Jack stood in the open as the fading light of day penetrated the gloomy interior.

A thick, wet cough emanated from deep within the room followed by a whimper and the sound of a heavy chain scraping across the floor.