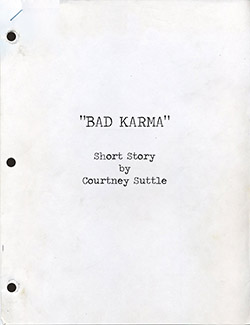 “You mean kill myself?” he asked as he downed another shot.

“No. Not that. You can always kill yourself. But you have to go clean. Or the bad thing happens…”

“The bad thing? What can be worse than suicide? I mean life is fucking pain, man. Fucking pain. Ain’t nothing worse than living the pain. Know what I mean?”

I nodded in the affirmative.

He fumbled a cigarette from his pack. I picked up his lighter off the table and ignited it. He had to grab hold of my hand to steady the wavering cigarette in his mouth. He puffed loudly as the flame took then exhaled straight into my face.

“Could you please not do that?” I said waving my hand in front of my face.

He waved a hand over his head.

“Hey, cutie! Couple a more beers for me and my friend.”

I made a slashing motion at my throat then lifted one finger. The waitress saw me and nodded her head.

“That’s right. You don’t drink neither.”

I looked at him until he caught my eye.

“Coming back and having to live the whole shitty thing over again.”

He thought for a minute.

The waitress set his beer down, pulled a five from his pile of money on the table and made change. She set the tip tray down in front of him and waited. He seemed lost in though so I pulled a one from the pile and handed it to her.

“Thanks. Your buddy gonna be alright?”

“Right as rain in no time.”

She rolled her eyes and walked away.

“I don’t want to do this shit again. No fucking way. I mean that’s why I wanna pull the plug.””

“Then you can’t leave any bad karma.”

“What the fuck’s karma got to do with me coming back?”

He took a long drag on his cigarette and then began to talk so the smoke came out married to his words.

I leaned back in my chair and stared at him.

“We cause pain to our loved ones that creates a lot of bad karma. Same thing for friends, co-workers. Negative energy. Anger, sometimes rage. Sadness. Bad juju. That’s not going clean.”

“How the fuck you avoid that?”

He slammed his beer on the table. Foam bubbled from the top and ran down the side covering his fingers and creating a small puddle. He was too drunk to notice.

“You see. It’s all about getting to the next level. Where the next life is easier.”

“Ex-wife. Bitch took me for everything then moved to New York with that fucking boss of hers.”

“Nah. Got me to sign over full custody. Told me I don’t need to pay her no money as long as I stay away from her and the kids…”

“How long has it been since you last saw them?”

“Man, ain’t you been listenin’? I said no contact. They were little when they left so they probably don’t even remember me.”

“Why the fuck’s that good?”

“Because when you go they won’t know. And if they don’t know they can’t suffer.”

“Now you’re getting it.”

“But what about my family and friends? My buddies at the plant?”

He took another drag on his cigarette and once again replied with smoky words.

He lifted his beer to his lips.

“Don’t take this the wrong way. But the sooner the better.”

Pausing with the bottle on his lips he looked at me with a glint of anger in his eyes. He pulled the bottle away from his mouth letting some beer dribble down his chin and onto his shirt.

I eyed him carefully. If he could make it through this…

“You want your mother to die.”

He set his beer down slowly. Placing his hands on the table he started to push himself out of his chair.

He hesitated. Looking down at his beer he gave up and lurched back into his seat.

I waited for his breathing to slow.

“Thash one way to look at it.”

He though for a minute then raised his eyes to mine.

He got it. I saw it in his demeanor. He sat up in his chair and his eyes cleared somewhat.

“All your buddies at the plant need to know is that your mother left you some money so you’re going to take early retirement and move to the mountains.”

“That doesn’t matter. They only need to think that.”

“But doesn’t lying fuck up your karma?”

“Not when you’re lying to save others pain. Then lying is a good thing, a blessing from God.”

He contemplated that for a moment.

“But my buddies will call me. Known some of those guys since high school.”

“That’s where the patience comes in. You move to a new town get another job but something that doesn’t involve contact with a lot of people. Like a night watchman.”

“If I don’t see a lot of people then nobody gonna miss me when I’m gone.”

I reached over and slapped his shoulder.

“Now you’re on the program.”

“They call you wait a week to call them back, then next time wait two weeks, then a month. Pretty soon they don’t call so much and one day they just quit calling. They’ll assume you just moved on with your life.”

“Out of sight out of mind.”

“None at all. And after they quit calling you put in your two weeks at your job and leave.”

He pondered that for a minute and I waited for the inevitable question.

“So how do I do it? I mean so I don’t cause anyone pain. Like the people that find my…”

“The mountains…or the ocean…you do it far enough out God’s creatures will make sure there’s no remains for people to find.”

“Maybe I’ll see you on the next level.”

“One can only hope.”

I saw the peace come over his face. He could see the light at the end of the tunnel. He knew now there would be an end to the suffering.

He offered me his hand as he stood up.

We both laughed at that.

I shook his hand.

“You never did tell me you name.”

I released his grip.

“I never knew you fellows could be so nice.”

He left the bar without another word. I never bothered to ask his name. Didn’t seem important.

The waitress came over.

“You all finished here, hon?”

“Yes. I think I am. Completely finished.”

She smiled nervously at my answer.

I walked out of the bar and went to my van. I patted the side and then climbed in the driver’s seat.

I’d followed the formula exactly as I presented it to my new friend. Slowly but surely I’d extricated myself from all my friendships. It took time. I was sure none of them missed me. None of them cared too much anyway when I was around which was good.

Out of sight out of mind.

Then I waited for my mother to die. Made sure we were clean when she left. After the funeral I waited a couple of months then moved far away. Contact with my sisters became infrequent to non existent. I was careful in my new town to not establish any new relationships. All I had were casual acquaintances at the dry cleaner, the grocery store, the local sports bar. And none of them even knew my name. If they never saw me again it wouldn’t even register.

I was as clean as I was gonna get.

But the formula wasn’t one for suicide although following it would cause my death. The formula was part of the tradecraft I’d learned at the camp in Sudan. It had allowed me to leave my country without anyone looking for me and establish a new identity here in the United States without drawing undo notice. It had worked to perfection enabling me to perform my mission without detection or capture.

Who pays attention to the 3rd shift dishwasher at the local diner?

I opened the console and reached inside. Pulling out the arming switch I thumbed open the trigger. I stared out of the windshield at the mountain range behind the Denver skyline.

I looked at the digital clock in the dash. Noon.

I bowed my head.

I pressed the trigger and the 25 megaton warhead stored in the back of the van sent me to the next level.