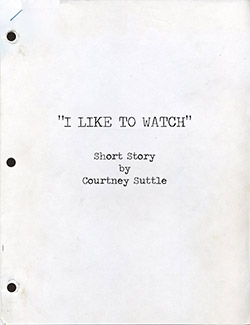 I like to watch, have since I was a little kid. Most people, including my coworkers, find my gaze disturbing. Whenever I visit some backwater country I inevitably see some peasant give me a sign to ward off the evil eye. I’ve had drug addicts and psychotics freak out when I stare at them too long. And girlfriends…well let’s just say the ones I’ve had didn’t last long.

The Bureau doesn’t seem to mind though. My ability is the one thing that separates me from ordinary agents. I don’t miss anything.

But this time, sitting across the table from Malcolm Cundit, Hollywood power producer, I had the sneaking suspicion I’d missed something.

And that would be very bad.

“Thanks for meeting with me, Mr. Cundit.”

He waved his hand in a “don’t worry about it” gesture. “Call me Mal, please.”

“And what should I call you, Agent?”

“Uh, that’s Special Agent Connelly, sir. But you can call me Don since this is an informal meet.”

The waiter appeared and removed the folded napkin from my plate, snapped it open and gently laid it across my lap. After repeating the performance for Cundit he stepped back.
“Drinks, gentlemen?”

“Thought you said you weren’t on duty, Don.”

Cundit took it in then understood. “Right. I’ll have a Bombay rocks with a twist, Cesar.”